Charitable Contributions Under the Tax Cuts and Jobs Act 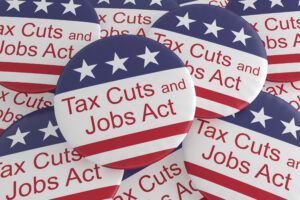 The Tax Cuts and Jobs Act of 2017, President Donald Trump’s keystone tax reform law, was a dramatic reshaping of the tax landscape for nearly all Americans. One of the biggest changes was an increase in the standard deduction to $12,000 for individuals and $24,000 for couples. This increase, coupled with eliminations of some itemized deductions and a limit on the state and local tax (SALT) deductions to $10,000, is expected to result in far fewer individuals itemizing deduction — including the charitable contribution deduction. The Urban-Brookings Tax Policy Center (UBTPC) estimates that the TCJA will cut the number of those itemizing their charitable contributions by more than half, from 21 percent to about 9 percent of households. For middle-income households, the drop is expected to be more than two-thirds.

But is there still a place for charitable deductions in your financial, tax, and estate planning? The answer, sadly for charities, is complicated. Assuming an individual is paying more than $10,000 in state and local taxes, he or she would have to give at least $2,000 in deductible charitable donations before their itemized deductions would exceed the standard deduction amount. For couples, those amounts are doubled. And remember that the tax break incentive for itemized deductions, including charitable contributions, only helps once your total deductions exceed the standard deduction amount.

One strategy that may become popular for those who wish to benefit from the tax incentives of charitable giving while still maximizing deductions is to bunch charitable contributions into a single year. Instead of giving $5,000 per year for five years, consider giving $25,000 one year and nothing the other four years, while still availing yourself of the standard deduction in the remaining four years.

There is a special exception for individuals aged 70.5 and older who wish to transfer funds from their individual retirement accounts. The IRA charitable rollover provision allows for giving $100,000 per year to qualified charities without tax liability.

Chattanooga area estate planning attorney Valerie W. Epstein helps to account for taxation and other concerns in crafting your plan. Call 423-265-5100 or contact us online. We provide free consultations and are available days, nights, weekends and holidays.

We will respond to your inquiry in a timely fashion. Thank you.